The Zoo Expands Once More

Now when you walk back onto our farm this is what you see......

all of the horses come running.... 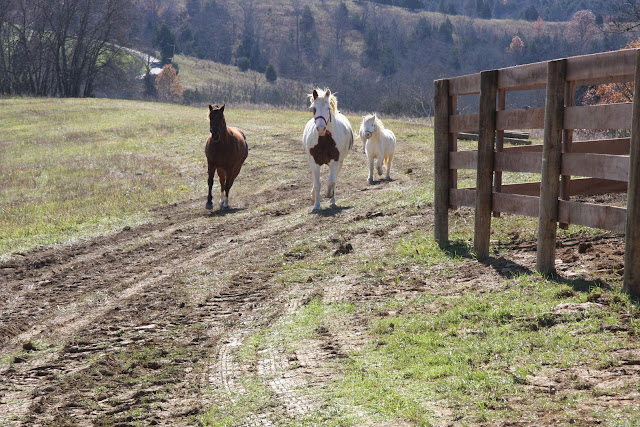 well, all except Butterscotch that is.  He's still playing hard to get most of the time. 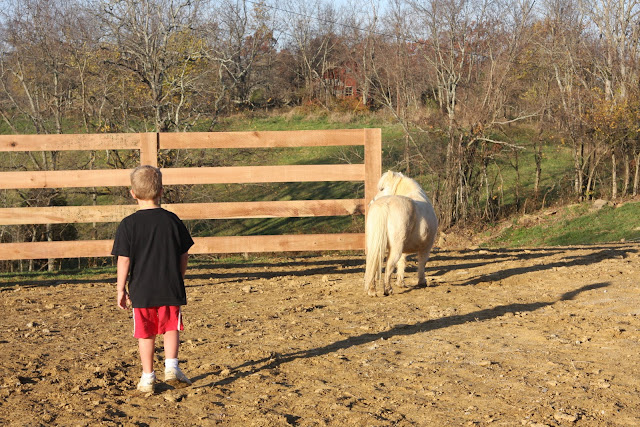 Everyone seems to have adjusted well to their new home.  We brought the two horses over Saturday morning early and worked with them most of the day.  Late that afternoon we went back for the two ponies and Butterscotch (who really only counts as half a horse in my opinion).

They were all glad to be reunited.


The rest of the four day weekend (kids were out of school Monday and Tuesday) was spent grooming, feeding, petting and loving on horses. 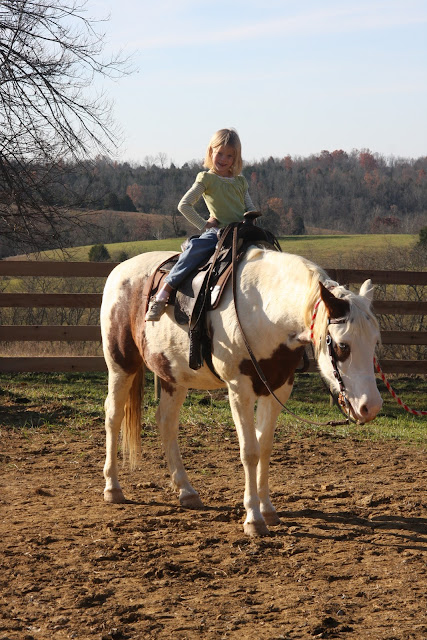 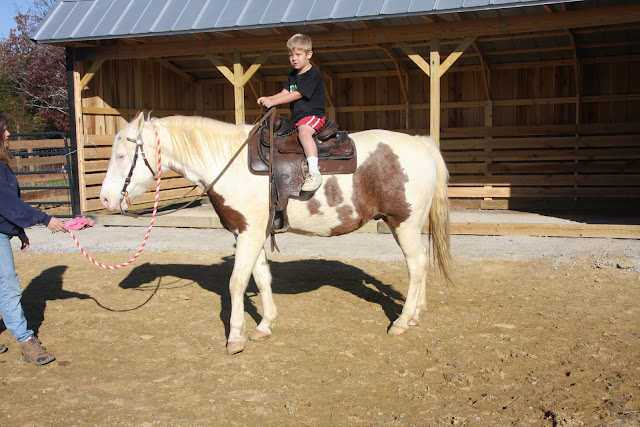 Grace and Grant were always quick to put lead ropes on the two ponies.  They would lead them around the paddock like oversized puppies.  It was quite comical.


There is never an issue with catching the horses.  All we have to do is open the tack room door where we store the horse feed and they are lined up waiting for a handout.  David and I agree before long we WILL end up with at least a pony if not a horse INSIDE the tack room with us. 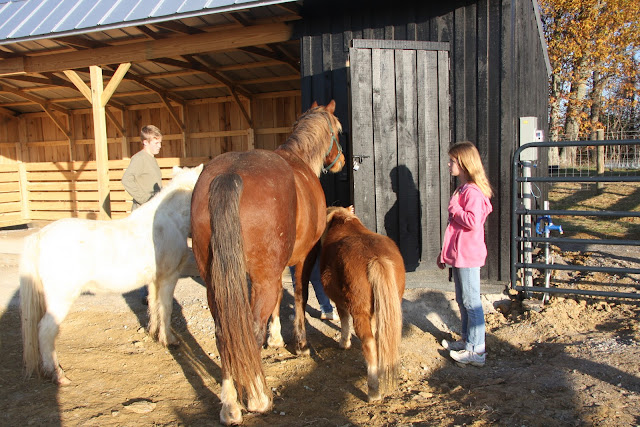 This is Major.  He's not a bit shy.  He gets pretty pushy when it comes to treats.  He LOVES pears.  Carrots really aren't his thing.
As you can tell from the picture though, Grace isn't about to be pushed around even by a thousand pounds of horse. 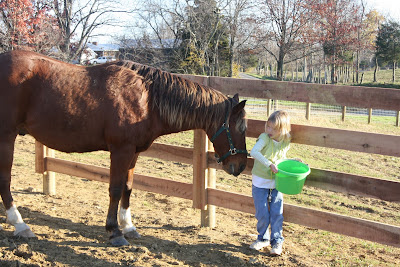 Emily was feeding Snowball.  He has really transformed into quite the little buddy with the kids.  In the beginning he wasn't really fond of being caught. 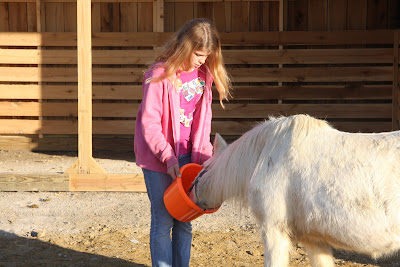 We also brought home the four seat wagon that Bluegrass Animal Land used with the ponies.  The former owner came over Monday afternoon and helped us hitch Snowball to the wagon and gave us a few pointers on using the wagon.  We also got a single seat buggy for the ponies to pull.  It need some extensive restoration before it's able to be used though. 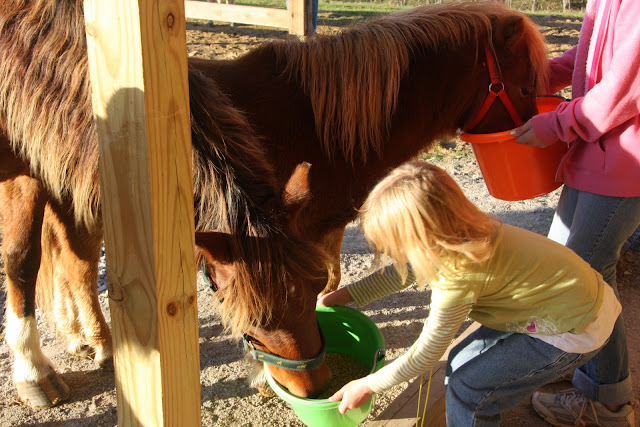 In the midst of all the hooves, corn, saddles and loves....Grant could be found playing in the dirt in the barn. 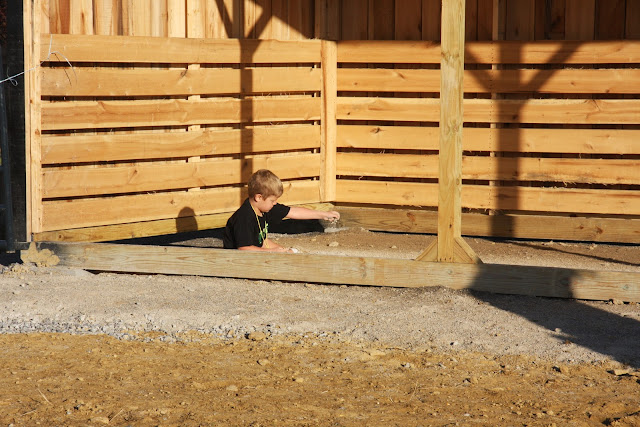 The zoo has gotten quite large over the years so it was with great ease that we all agreed..... 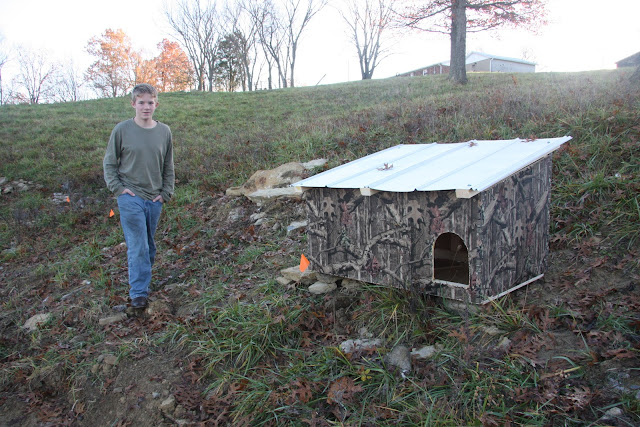 A couple more DUCKS, that is. 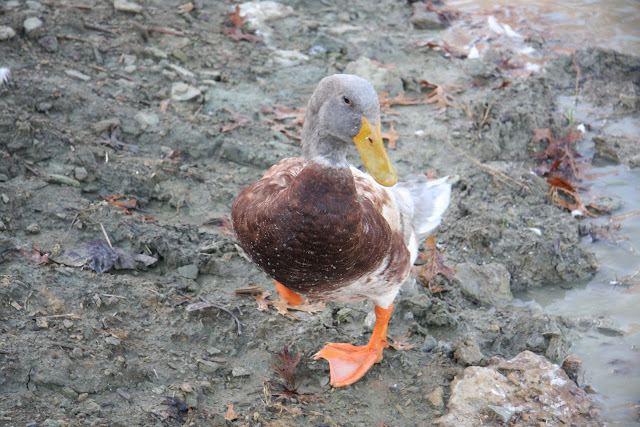 and his lovely wife Daisy. 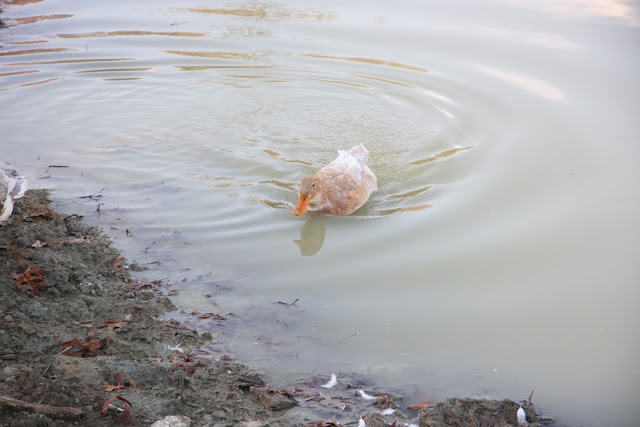 They are our newest residents at the farm.
Both are very tame and easy to pet and catch.
At least they're easy to catch when a four year old isn't hot on their heels screaming and chasing them around the yard. 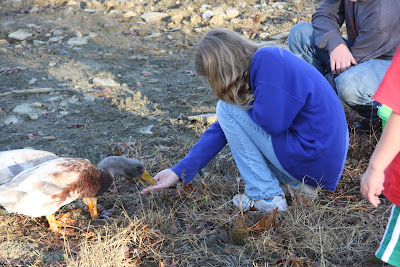 See?
They'll eat right out of  your hand.

These were the last two ducks left at the petting zoo.  Rick basically gave them to us just to get them gone.

Good thing the camel was sold so quickly.
We might have become camel jockeys at this rate!
Posted by otherwise known as mom