We have been talking a lot to Grace and Grant about the importance of saving and how to take care of their money.  A few days ago I gave Grace and Grant children's checkbooks.
They were checkbooks that I have kept for years.  I never found time to use them with John and Emily as I had planned. This seemed like a perfect time to give the checkbooks to Grace and Grant to reinforce our lessons on money (and make a little extra room in an office drawer).
Grace and Grant have pestered me incessantly asked me several times to show them how to write checks with their new checkbooks.  I have tried to emphasize these checks are pretend checks for children to practice with.  They have no real value.
I'm guessing that message was missed on my newly turned seven year old.
This is what he handed me tonight.

He had a change of heart about what he wanted Santa to bring him.
Now he wants another Octonauts toy (that's why it says Oct Gup F on the memo line) instead of the Hot Wheels Car Maker that SANTA already had ready to give him.  He thought by giving Santa a check, the jolly man would be able to afford a second present for Grant.
I guess Santa isn't done shopping after all!!
Here are Grant's answer to his Star of the Week questions... 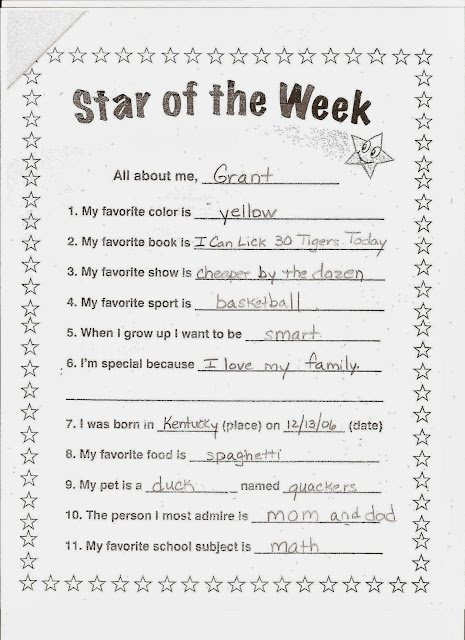 That about sums him up right now.  There isn't much I could add to that profile.