He has rock(s) in his head

Seriously......he does.﻿
Tonight while I was preparing dinner Grant came into the kitchen.  He made me kneel down because he had 'a secret to tell' me.  He whispered something I didn't fully understand since the house was loud with kids and dogs and cats and television all going at once.  It sounded like he said he had a rock in his nose or maybe like the dog bit his toes or he wanted to play with the garden hose.  I couldn't really say for sure.  I just said something motherly like 'oh that's nice...now go play until dinner'
Big mistake.
Ten or fifteen minutes later he was back wanting to tell me another secret.  I dutifully knelt down and this time I clearly heard him whisper in my ear....
"my nose hurts...can you get the rock out?"
Oh    #$%^!!!
So after much blowing of Grant's nose and sticking a flashlight and a nasal aspirator up his nose and after a last minute call to the pediatrician I loaded up my four year old rock jamming orifice blocking son and off to Kosair Children's Hospital we headed.
He was not happy about being asked to wear a pulse ox meter. 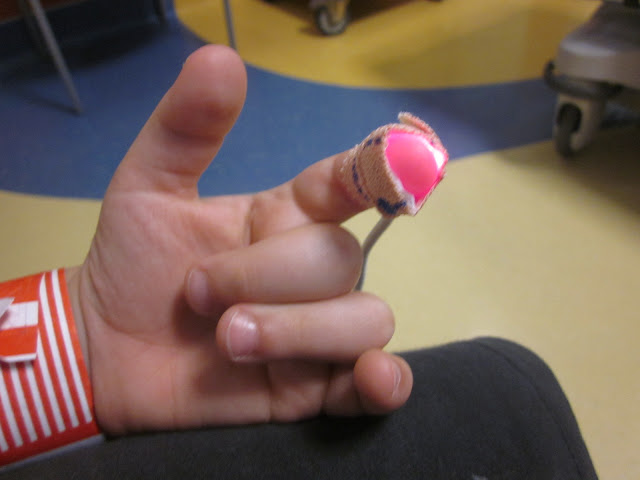 He was even less thrilled at the new attire. 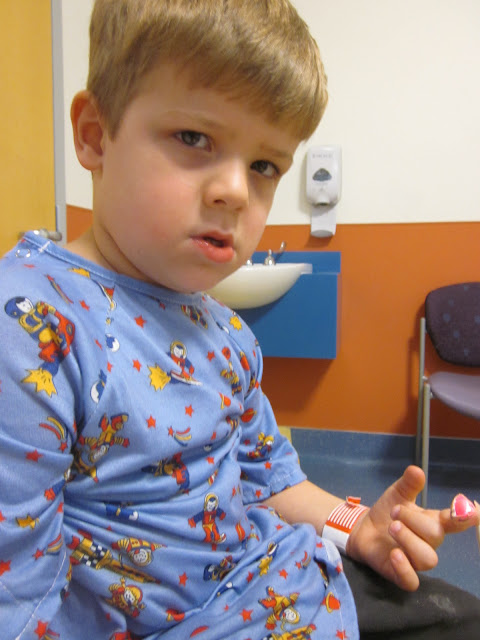 Three and a half hours, three x-rays, three failed saline irrigations, two failed suctioning attempts they sent my son home with a rock still stuck in his sinus cavity and a phone number for a pediatric ENT to call on Monday.
So, how is your weekend going??
Posted by otherwise known as mom