Lots of not much

School is officially over.  Friday was the first day of summer vacation for the kids.
How did we start our summer? 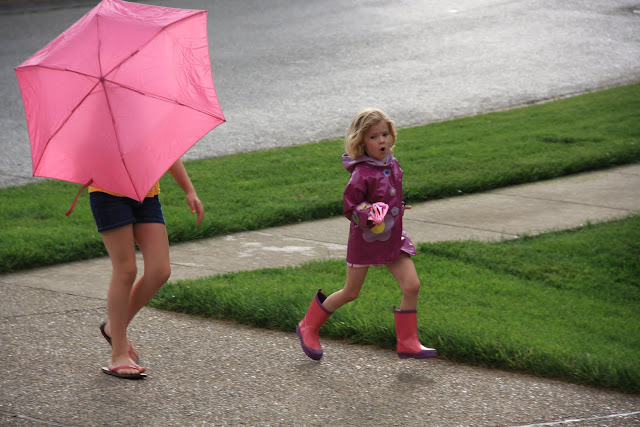 We loaded them up for a work day at the farm.
John mowed and trimmed the yard.  Emily helped me weed the garden.
There were more thistles that needed cut in the pasture.
Fun times.
Yes indeed.  Fun times. 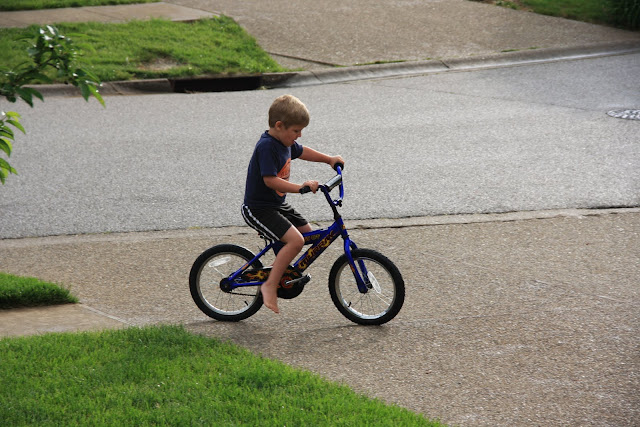 Isn't that awful?  We don't even let him mow our own yard.  We've always said the hill in back is too steep for him to mow yet.  The irony of that is the yard he is mowing now has a hill that David says is worse than our own!!  (I think that will get us a nomination for some sort of parenting award this year.) 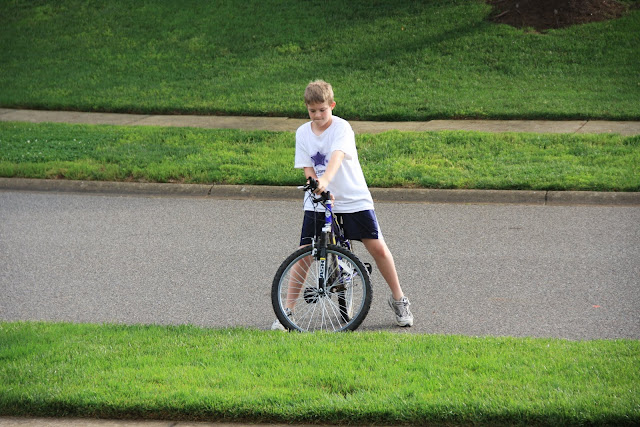 I'm not supposed to tell you all this little detail, but I can't wait any longer.
Someone in our family just got glasses last month.
Want to guess who?? 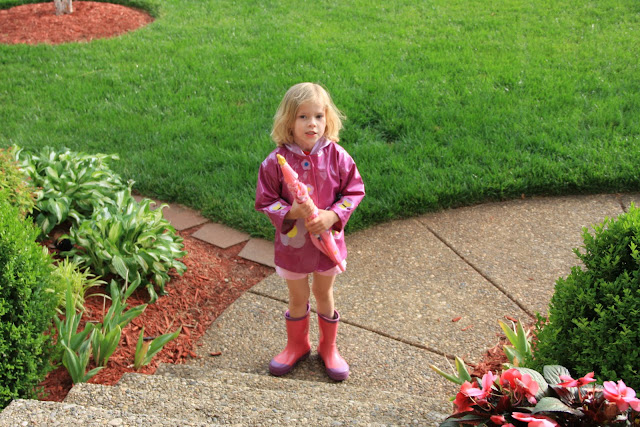 Nope.  She already has glasses.
SOMEONE in this picture now owns glasses. 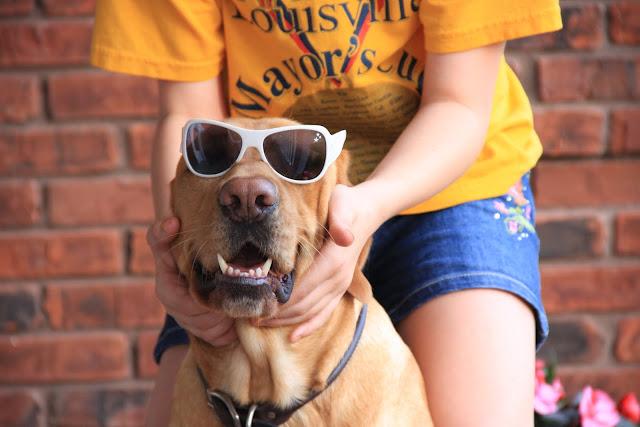 The SOMEONE I'm talking about does not have a tail or floppy ears either.
If you've not guessed yet, then well, you're just a really poor guesser!
Our pediatrician says hard hats are not a good substitute for bike helmets. 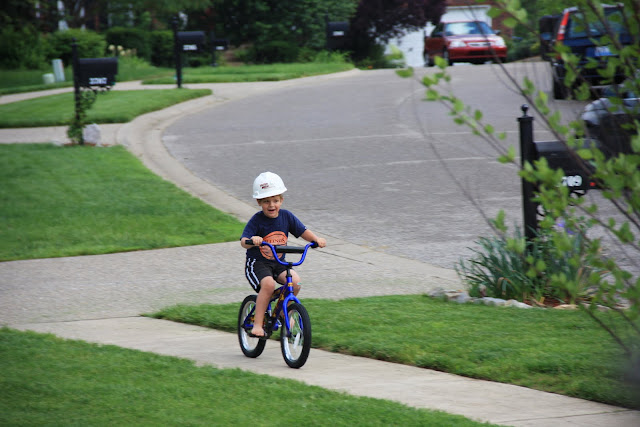 But what does he really know??
Grant seems to think hard hats work just fine! 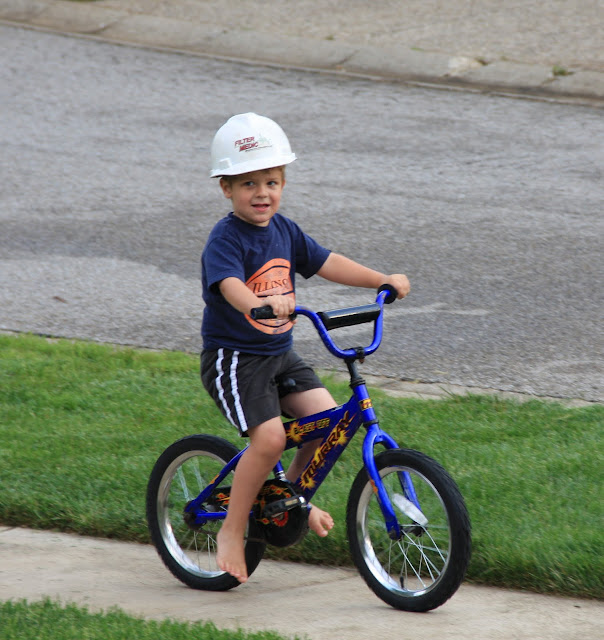 The umbrella thing isn't quite as protective in a fall, 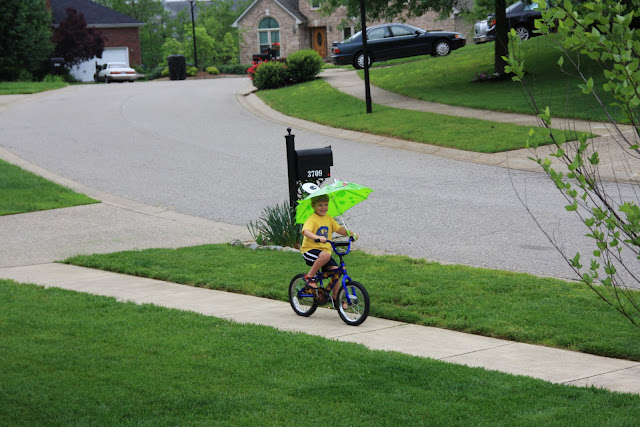 but it sure makes a great fashion statement!! 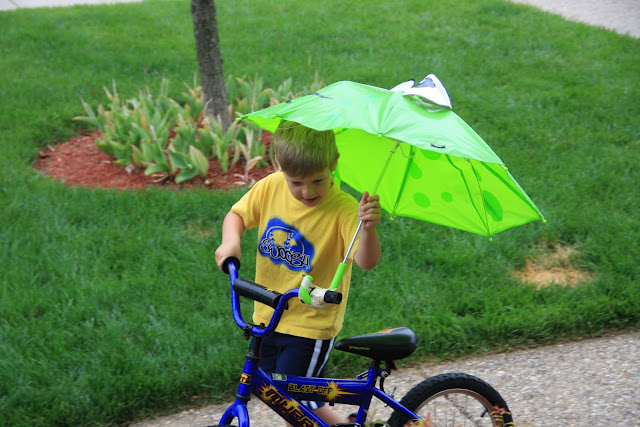 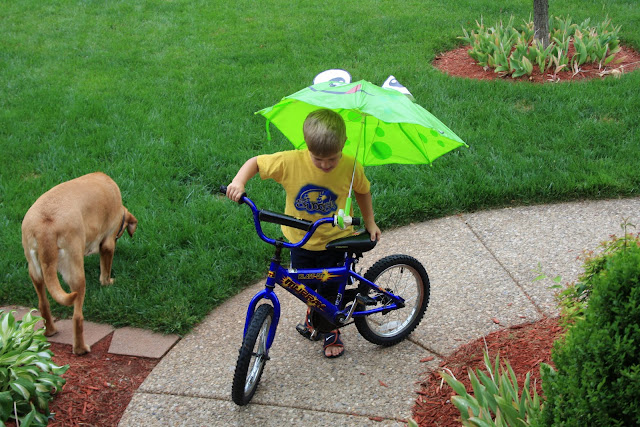 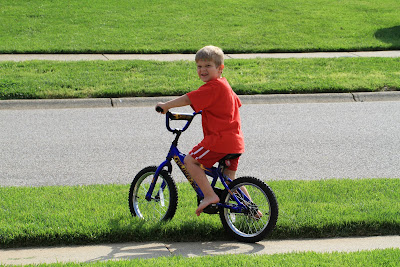 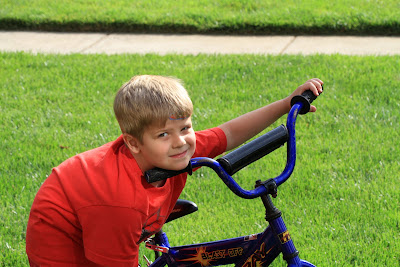 This guy is doing great on a bike.
He's even tried to ride without using his hands just like his big brother and sister do.
That little trick wound up costing him a few band-aids.  I hope you took my advice and bought stock in those things. 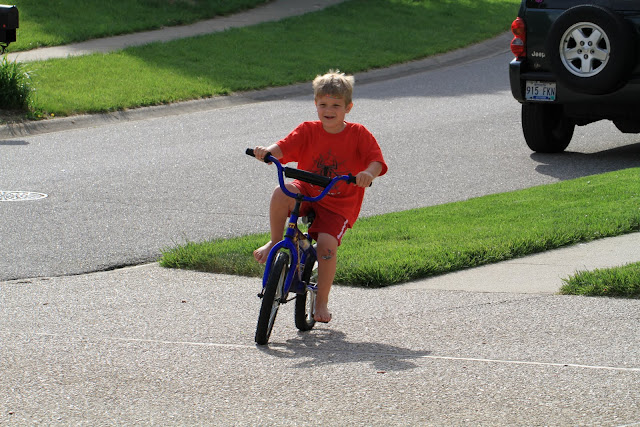 Seeing as how summer vacation started in earnest today, I handed the kids their chore lists for the summer.  The big kids get about three hours of chores/studying to do a day.  Grace and Grant are doing a few chores and some school work too, but not nearly as much as John and Emily.
It was sort of enjoyable today.  I sat down with all four at the kitchen table to work on their school review books/preschool workbooks.  I don't think I'm cut out for homeschooling, but I can see where there would be great satisfaction in doing their schooling full-time.
I even found a really neat introduction to Latin that we're going to jump in and try.  The kids have the opportunity to study Latin at their middle and high schools.  I have heard though that the classes are extremely challenging.  I thought this might give them an early lead if they choose to take that as their foreign language someday.  Plus I know it is supposed to help with many other areas of study as well.  We'll see how it goes.  It might fall flat right at the start, but you never know until you try, right?
We've been to the pool five or six times already this year.  Grace and Grant aren't swimming as well as they were last fall, but they'll get there soon enough.
I'm thinking about having one of our lifeguards do private lessons with them for a couple weeks here at the start of summer.  That is a small price to pay so I don't have to get in that cold pool so much!  Brrrrr!
I know this is extremely random.
Lots more to tell.
Tons of pictures I've not downloaded.
I'm just busy doing other things right now.  I hope to get back to them later this week.
Posted by otherwise known as mom