Not the physics kind of mass that deals with force and acceleration.  That kind of mass used to be fodder for nightmares in my college days.

The kind of mass I am referring to here is of the Catholic variety. 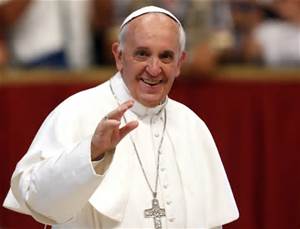 No.   We have not succumbed to Pope-palooza.  We have not converted to Catholicism.  But we did attend a mass of sorts Sunday.

John's band from high school was invited to be part of Bernstein's Mass which was performed at the Kentucky Center for the Performing Arts.  The Mass was performed both Saturday night and Sunday afternoon.

David and I watched the Sunday performance. This was quite a cultural experience for two very uncultured people.  We went.  We listened.  We enjoyed.  But we probably would not need to go back for another performance.  The entire performance could be described as bizarre.

John was so excited to participate in the production though.  That part of it was really great. The band actually wore their marching uniforms for the performance.  That might be the only time he ever wears it given that he does not usually march with the band.  I failed to get a picture of him wearing it.  Sorry!

Someday he will be glad there are no pictures of him wearing a marching band uniform.  I speak from experience.

We made it to Kentucky Kingdom one last time before it closed for the year.  We had a beautiful day riding coasters.  David managed to join us for the fun too.

Not much else happened around here this weekend.

Hope your weekend was good!
Posted by otherwise known as mom