During our last night at Disney we dined at the
Whispering Canyon Cafe at the Wilderness Lodge.
It is a fun place for casual dining
and a great place to eat if you like ketchup...... 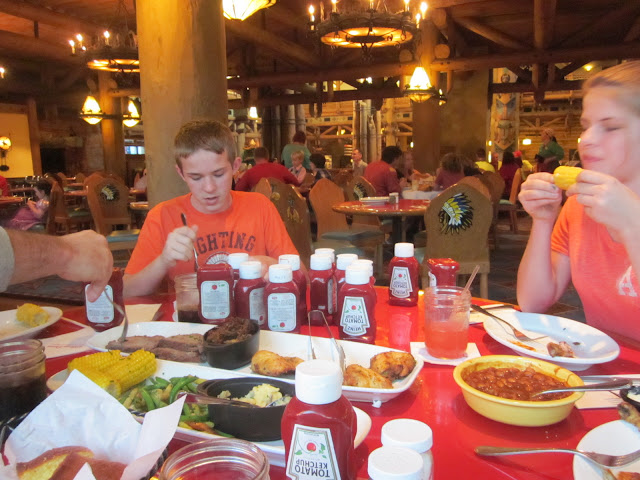 This is a picture of approximately fifteen bottles of ketchup on our table.
"Why?" you ask.
Well,
we were some of the first diners of the evening.
The first poor person in the restaurant to ask their waitress for ketchup was required to yell LOUDLY
"WE NEED KETCHUP"
That prompted all waiters/waitresses to appear bearing a bottle of ketchup.
The next poor person asking for ketchup was also required to yell
"WE NEED KETCHUP"
The diners at the first table then transferred all the spare ketchup bottles to the next needy table.
This went on all evening.
We ended up with about fifteen bottles on the table for about ten minutes before someone else yelled for ketchup.
Our kids were more than happy to pass on the tradition and the extra ketchup. 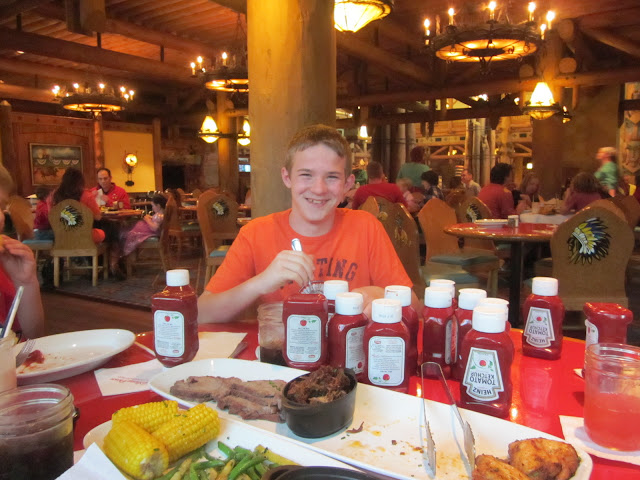 I am certain this must be Grant's favorite place in the world to eat
given the abundance of ketchup.
Tonight he wanted extra ketchup to put on his mashed potatoes and gravy.
Yuck.

Later in the evening the kids all rode in
a stick horse roundup around the restaurant.
Even John and Emily had fun participating.
Here they were lined up and ready to go. 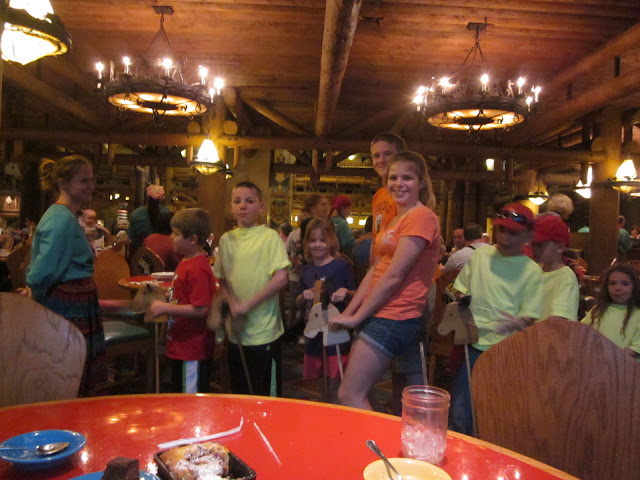 This was our server, Suzan.
She was terrific. 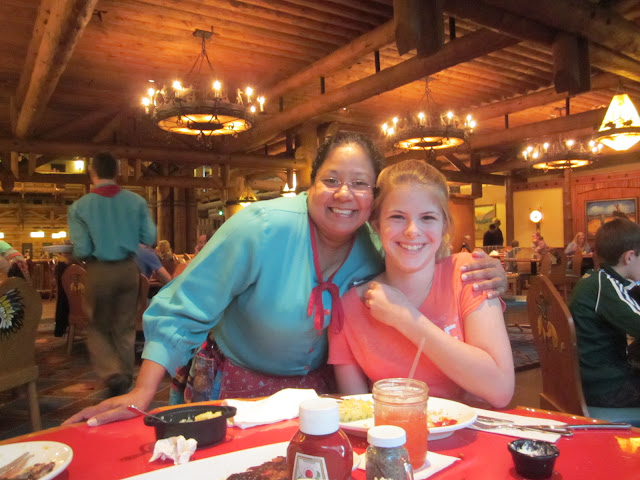 Emily was terrified of her.
She gave Emily many tongue lashings while we were eating.
They covered topics as wide ranging as
texting at the table
elbows on the table
talking with her mouth full
answering with Yes, Ma'am
and what/how much she was eating.
It was all in good fun, but I think Emily didn't quite know what to do about it all.
Behave yourself, Emily.
I might call Suzan if you get out of line!!
These are the last of the Disney pictures.
Now we return to your regularly scheduled blogging.
~~~~~~~~~~~~~~~~~~~~~~~~~~~
Grant lost his third tooth today...
exactly fifteen seconds before he got out of the car in carpool line this morning.
It was loose and he insisted he wanted me to pull it,
so I obliged.
He went to class with a mouthful of blood
and a grin from ear to ear.
He has waited the entire school year to lose a tooth
so he could get his name put on the tooth bulletin board in his room
Today he succeeded.
That was the first thing he told me when he got in the car after class.
BEST DAY EVER were his words.
Doesn't take much to make that kid happy.
~~~~~~~~~~~~~~~~~~~~~~~~
Grade cards came home today.
Mostly A's with a couple B's sprinkled in to keep them humble.
Only two more grading periods until the year ends.
I can't believe the two older ones will be graduating eighth grade this year.
They are growing up fast.