The Cat With NINE Eight Lives
by Angela Shupe 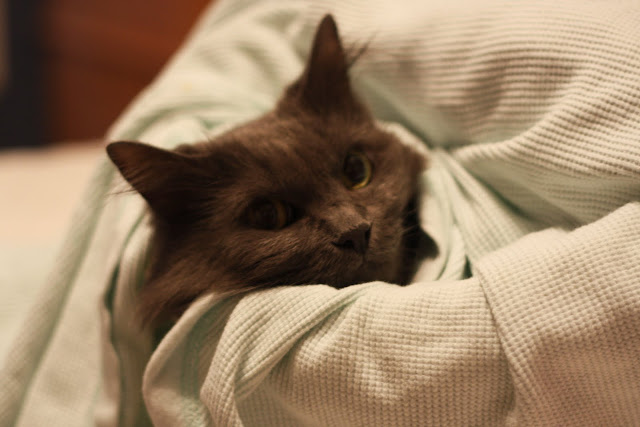 Kitty is the only name she's ever had.  We're original that way.  She came to live with us in 1998 when we impulsively decided to adopt her from an adoption center at a pet store.  We took her home to meet her new feline roommate, Mounds (You know....Almond Joy's got nuts....Mounds DON"T)(Now you know why we just named her Kitty.  Naming pets isn't our strength).

She has been with us through thick and thin.  She's not complained once during the move to a new home or the introduction of four kids or an energetic puppy into her life.  She is loving and tolerant in spite of her tendency to occasionally hiss her displeasure at kids and dogs.

We take her presence for granted. Tonight was a opportunity to reappreciate Kitty.

It all began innocently enough with something like this going on.... 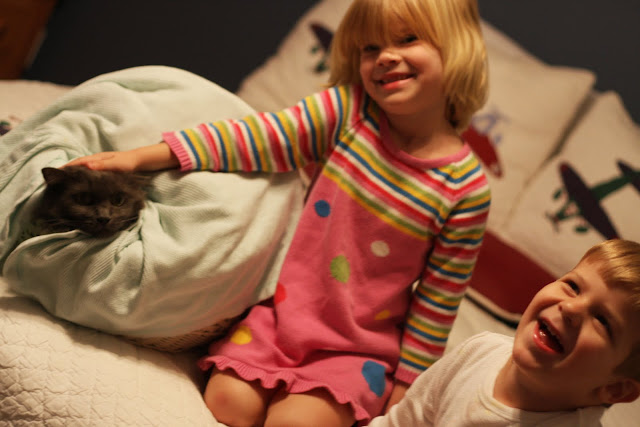 The kids were playing with Kitty in Grant's room.  As you can see, she was thrilled with the attention.......well, OK, maybe not.  Anyway, she put up with their antics.  I proceeded downstairs to finish dinner.

Some time later after we had eaten, David and I were in the kitchen visiting.  Grace called to David to come help her.  He asked what she needed.  She called back that she had tied up the cat in Grant's closet.  The string was too tight and could he please come get the cat loose since she couldn't untie it.

At that moment I did the math to realize the cat had been upstairs for more than an hour while we had eaten dinner.  I had not heard as much as a meow or a scratch that entire time.  David doing the same calculations realized the chances that Kitty was no longer breathing.  He dashed upstairs in hopes of rescuing Kitty.

Luckily, Grace failed to mention that the string keeping Kitty in the closet was tied around the closet door knobs NOT the cat's neck.

David didn't need to use the treadmill tonight.  He had already gotten his exercise running to the rescue of innocent pets.

Kitty?  Well, other than being unhappy at being in the closet for so long, was just fine......minus one of her nine lives, but hey, who's counting?