Casey At The Bat - Girl style

The outlook wasn't brilliant for the Mudville nine that day;
The score stood four to two, with but one inning left to play,
And then when Cooney died at first, and Barrows did the same,
A pall-like silence fell upon the patrons of the game.
A straggling few got up to go in deep despair.  The rest
clung to that hope which springs eternal in the human breast;
They thought, "If only Casey could but get a whack at that-
We'd put up even money now, with Casey at the bat."
But Flynn preceded Casey, as did also Jimmy Blake,
And the former was a hoodoo, while the latter was a cake;
So upon that stricken multitude grim melancholy sat;
For there seemed but little chance of Casey getting to the bat.
But Flynn let drive a single, to the wonderment of all,
And Blake, the much despised, tore the cover off the ball;
And when the dust had lifted, and men saw what had occurred,
There was Jimmy safe at second and Flynn a-hugging third.
﻿
Then from five thousand throats and more there rose a lusty yell;
It rumbled through the valley, it rattled in the dell
It pounded on the mountain and recoiled upon the flat,
For Casey  Gracie, mighty Casey Gracie was advancing to the bat. 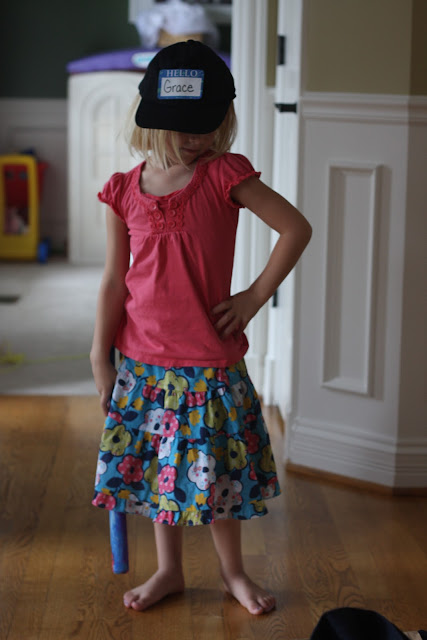 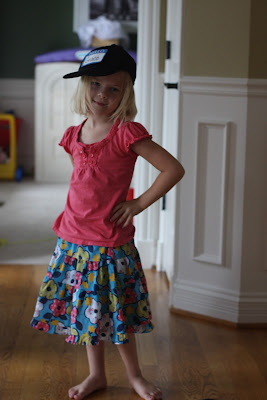 There was ease in Gracie's manner as she stepped into her place.  There was pride in Gracie's bearing and a smile lit Gracie's face.  And when, responding to the cheers, she lightly doffed her hat, No stranger in the crowd could doubt 'twas Gracie at the bat. 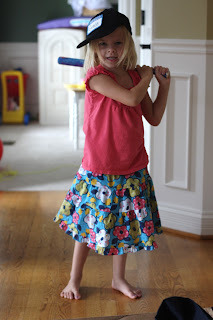 And now the leather-covered sphere came hurtling through the air, And Gracie stood a-watching it in haughty grandeur there.  Close by the sturdy batsman the ball unheeded sped -"That ain't my style," said Gracie.   "Strike one!"   the umpire said.
From the benches, black with people, there went up a muffled roar,
Like the beating of the storm-waves on a stern and distant shore;
"Kill him! Kill the umpire!" shouted someone on the stand;
And it's likely they'd have killed him had not Gracie raised her hand.
With a smile of Christian charity great Gracie's visage shone;
She stilled the rising tumult; she bade the game go on;
She signaled to the pitcher, and once more the dun sphere flew;
But Gracie still ignored it; and the umpire said 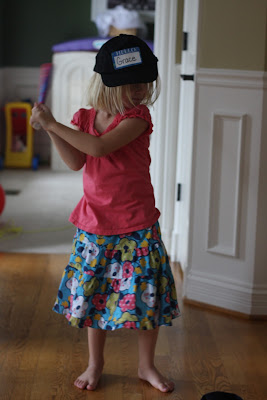 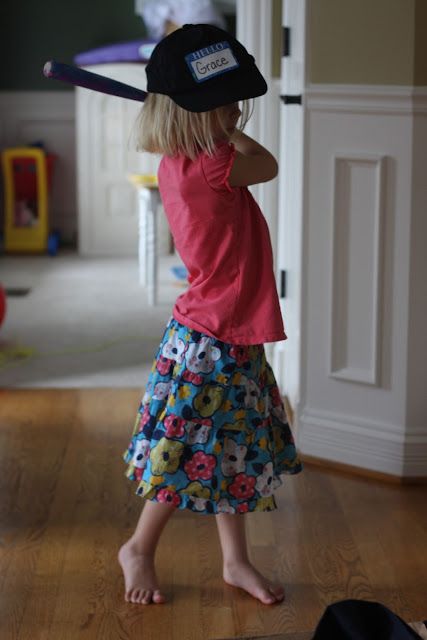 "Fraud!" cried the maddened thousands, and echo answered "Fraud!"
But one scornful look from Gracie and the audience was awed.
They saw her face grow stern and cold, they saw her muscles strain,
And they knew that Gracie wouldn't let that ball go by again.
The sneer has fled from Gracie's lip, the teeth are clenched in hate;
She pounds with cruel violence her bat upon the plate.
And now the pitcher holds the ball, and now he lets it go,
And now the air is shattered by the force of Gracie's blow.
Oh, somewhere in this favored land the sun is shining bright,
The band is playing somewhere, and somewhere hearts are light,
And somewhere men are laughing, and little children shout;
But there's no joy in Mudville...... 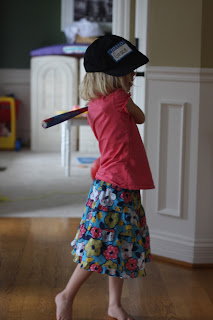 mighty Casey  Gracie  has struck out. 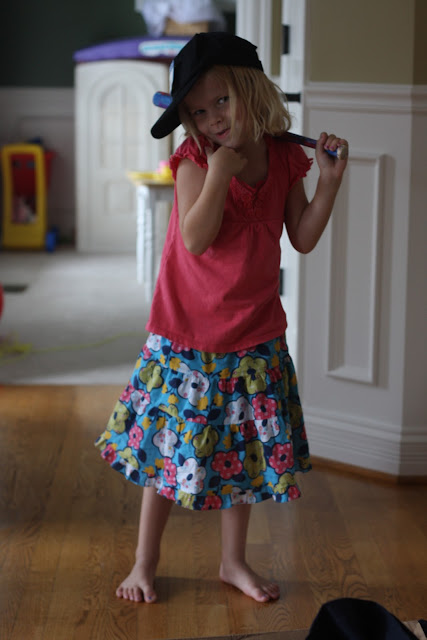 She asked me to take pictures of her the other day while playing with a bat in the house (which I normally don't allow...I have no idea why or how it made it inside).
She was really playing it up for the camera.
Not until I downloaded these and were looking at them did it remind me of the poem.  I love this poem.  I bought a book with beautiful illustrations of this for John and Emily when they were in kindergarten.  I'll have to find it and read it to Grace and Grant.
Sorry for the long post.  I couldn't resist.
And just in case you didn't figure it out by now...
NO, I did not write this poem.  It is credited to Ernest Lawrence Thayer and was written for the San Francisco Examiner - June 3, 1888.  I believe if you do the research there are some representations of actual players in this poem.  I don't recall anymore who it was referencing.
Gotta go find my puppy.  It is wandering alone in the house....that can be a dangerous thing.
Good night!


I don't know why this is stuck on the bottom of these other pictures, but since it is, I'll explain.  I counted twelve bicycles in the yard/garage this particular afternoon.  I thought I might open a used bicycle shop...
in all my spare time of course. 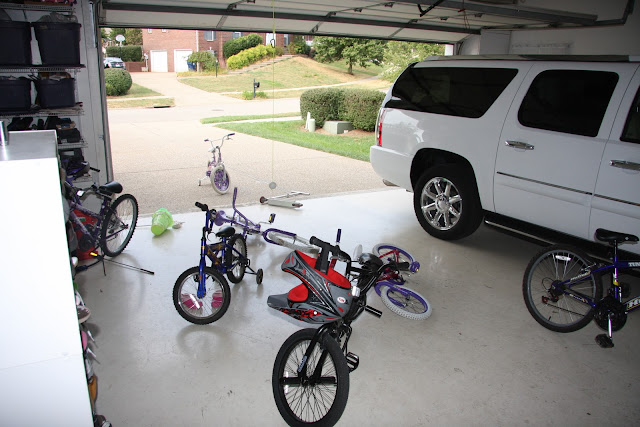