Who needs a pricey irrigation system 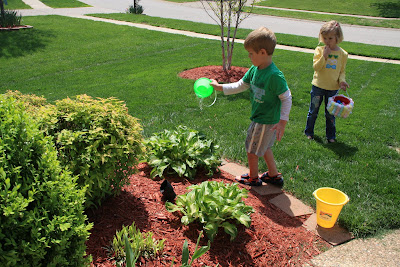 when they've got kids and buckets of water? 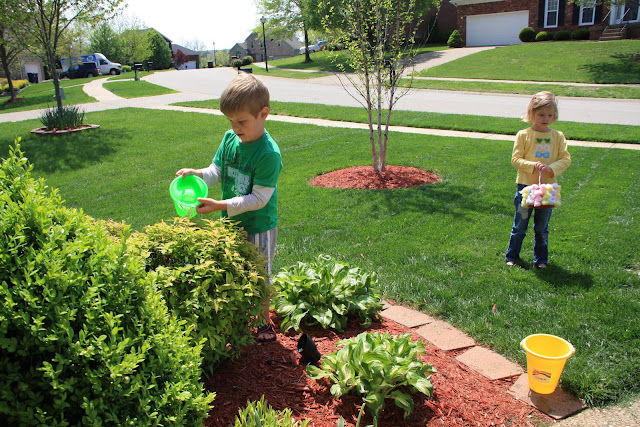 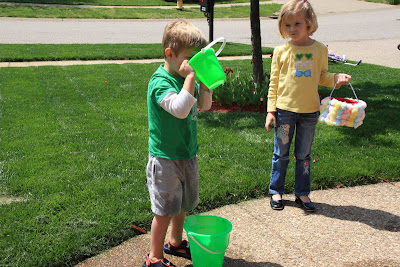 Bonus:  when they get thirsty, the watering bucket doubles as a drinking bucket!
***************
Grace was cleaning her room yesterday.  Did I mention my kids LIKE to clean?  I wish that trait lasted until adolescence, but no such luck!  Anyway, after Grace finished cleaning, she was showing me the results of her hard work.  She was especially proud of her trophy from gymnastics.  It has a renewed sparkle since she dusted it off.
Her explanation of what she did to the trophy??
Grace's words..........  Well, I "huh'd" on the gold parts of it.  That made it cloudy. Then, after I rubbed "the huh" off it was all shiny again.
What she's explaining is what she sees me do when I clean my glasses by fogging them with my breath.  She called that "huh'ing" on them.
********************
John and Emily are now in possession of their own personal checking accounts.  They're pretty excited about the prospect of writing checks and using debit cards.  I figure there's no time like the present to begin teaching them how to manage their finances.
*********************
My kids know what a polygraph test is......right kids??
No explanation here.
The persons involved know what that's about.
Someday we'll look back on this week and smile...maybe even laugh.
Until then, thank you for being honest.
*****************
I live in a strange city.
As part of the Derby celebrations, people voluntarily form teams.  These teams proceed to decorate a hospital bed and race one another around an indoor track.
They take this very seriously.
I wish I were kidding, but I'm not.
********************
I made chili and 15 bean soup for dinner last night.  It sounded like a good meal to serve yesterday.
It's that cold in May.
********************
David found mushrooms at the farm.  That's the first time in almost five years that we've located any out there.  He was excited.....even though the mushrooms were way past the edible stage.....he was excited just to find some!
No pictures of them. Sorry, David!
********************
When David and I dated, we used to play Padiddle (driving at night and looking for cars with headlights burned out).
We played for kisses.
Apparently there is a  much more intense version of the game that involves losing articles of clothes if you're not the one who spots the headlight first.  I think I'll stick with the kissing version.  I'm too old for anything else.
***************
Grace's last week of school is next week.  I cannot believe it's here already.  I also cannot believe that starting in August she will be gone most of the day.  Grant is going to miss his buddy.
She has a little graduation ceremony on the last day of school.  Maybe I can remember my camera.  I've been bad lately.
***************
Enough ramblings.  I have to get my kindergartener to school!
Have a good day!
Posted by otherwise known as mom