Finally, I am getting to the pictures I really wanted to post.  They aren't super exciting, but it is the first time Grant was ever at the beach and the first time Grace has been there other than as a baby.  I want to post them before I forget the siginificance of the moment.

Grant loved the water.  He spent a lot of time running into and out of the waves. 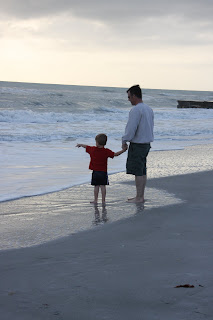 David made them pose for this picture.  We have a picture of Emily and John standing together just like this when they were just about Grace's age.  Maybe I'll find the picture of John and Emily from a few years ago to post with this....then again, maybe I won't. 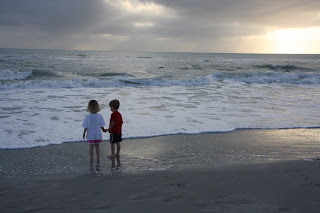 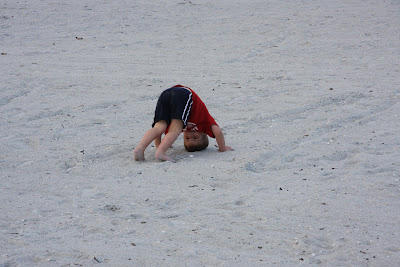 This is what Grant did everytime he came running back up the beach after wading in the water.  I have NO IDEA why he would do this.  He did it all week!!  It made for some gritty baths at the end of the day.  He got so much sand in his hair doing this.
What  a nut job.
Speaking of nut job....... 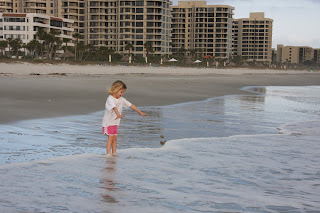 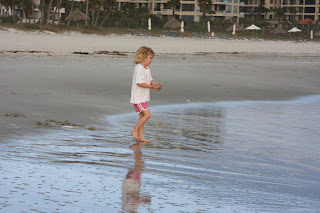 Grace made it her mission to move the beach back into the water one handful of sand at a time.  She would walk up the beach and grab a handful of sand.  Then she would walk down and toss it in the water.  This made for probably an hour of entertainment before she figured out it was the equivelant of spitting in the ocean.  She wasn't making much progress!! 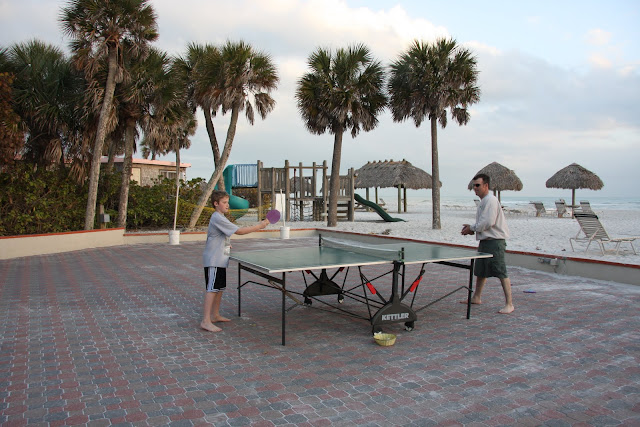 Ping Pong was the game of choice for the week.  We played LOTS of ping pong......some sober, some not so sober(parents only).
The lack of sobriety helped keep the competition a bit more fair.  It was a sacrifice, but you know us, we'll do just about anything for family harmony. 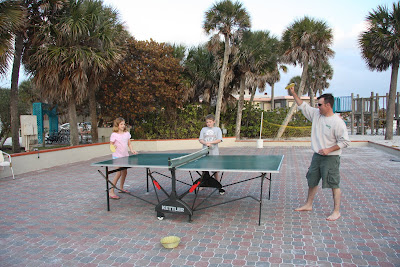 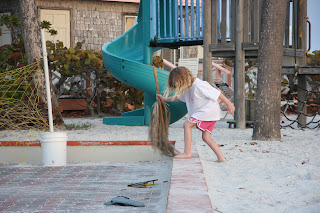 While ferocious ping pong battles were being waged, Grace found a dead palm branch to use as a broom.  She did her part to keep the beach neat and tidy by sweeping sand off the pavers and back onto the beach.

She is a cleaning machine!!! 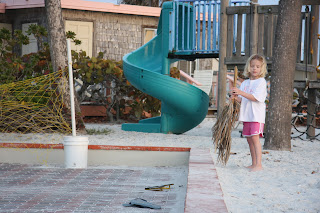 Emily joined her in the fun.  I just hope they like cleaning that much when they get older!! 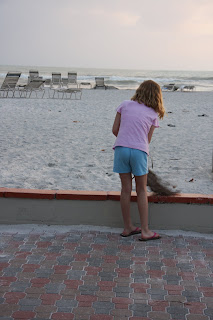 This isn't a really organized post.  I'll sacrifice organization for the sake of being caught up!!
I'm making progress around the house, it is just slow.
I washed windows today (didn't get them all done, but hey), but it was so pretty that we stopped for about three hours this afternoon.
I took them to the playground at church.  They had never been on it and thought it was really fun.  There were two or three "mommy" groups there.  I of course wandered up alone as usual which suits me fine.  It did give the kids someone to play with besides each other which was nice.
I could take about six months of this weather without complaining!!!
Posted by otherwise known as mom