Puppy pictures are coming, I promise!!  Can you imagine things are a little out of control around here right now???  Well, imagine, because they are.

I think we currently have five puppies spoken for now.  One person changed their mind that had wanted to take one, but that's still progress toward placing all of them since we've not officially advertised yet.  Here's hoping we can get them all placed in good homes.

I love our puppies.


We went boating twice in September.  Both times we had beautiful weather.  David and I both skied.  John did as well.  Yes, that is right.  John Shupe is now skiing.  He's worked at it the past two summers during the few opportunities he's had.  The last trip to the lake this year he got up and skied all three times that he tried.
Did I mention how proud of my son I am that he learned to ski? 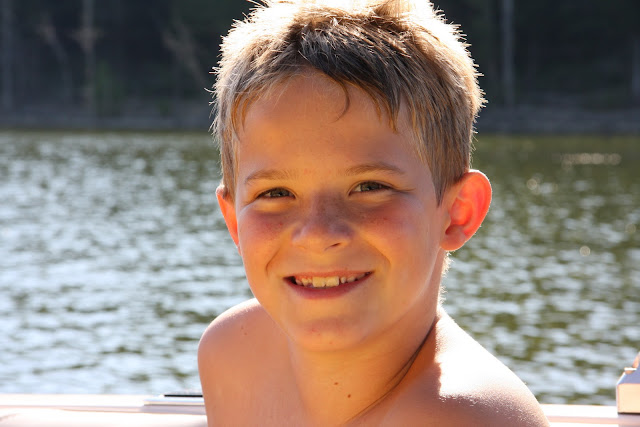 My scholars have again joined the quick recall team this year in middle school.  No pictures of it (way uncool for moms to take pictures of middle schoolers in front of their friends) (so I've been told), but they had their first match last week and won quite handily.
I hate my sewing machine!!  Actually my machine and I have a love/hate thing going on.  When it works it is the best thing ever.  When it chooses not to work, well, watch out!  Momma has little patience with sewing these days and even less patience when the sewing machine is being stubborn.

I did get eleven or twelve pairs of pants hemmed for the kids for school.  Both of them had to go up a size, but I couldn't find any that fit in girth and length.  Therefore, I'm hemming.....and sweating.....and maybe a little swearing too (maybe only once or twice when things got really out of hand) (quietly so as not to harm the children of course) (sorry mom).

Did I mention I hate sewing??

We went to the nearby orchard on Saturday to pick pumpkins.  The weather was great.

We stopped to feed the fish and ducks before leaving.  Grant kinda ruined a photo op for another family by 'herding' the ducks down into the water.  I apologized, but the photo taking granny didn't seem much amused by his herding abilities.  Oops!


Grade cards come home on Tuesday.  I've already checked online.  Two kids plus twelve A's equals two happy parents.  I cannot be prouder of their grade cards given the rocky start to the school year.  Let's hope for many repeat performances the rest of their three year career in middle school.

Did I mention how proud I am of my kids?


I also hate Wal-mart.  Again, more of a love/hate thing, but let's not get complicated here with details.  Short version.......
I cruised into Wal-mart last week to do a bunch of shopping.  Smiled at the little greeter lady who really seems to have the best paying job in town.  I want that job when I get old(er).

After ninety minutes (or so) of filling a cart as heaping full as is possible I wheeled it up to check out only to then be told their computers were not working and they could only do cash transactions.  If you know me and my relationship with money (and most probably don't), you will know that at most I might have ten dollars cash to my name at any given time.

This presented a dilemma seeing as how I knew there was not immediate cash to pull from our bank account.

I was not about to waste ninety minutes of shopping just to do it again another day.  I pulled the cash  and said a little prayer that it wouldn't hit the account before I could cover it the next day.  All was well in the end.  Our good credit score remains intact.

The problem?? Why was no one announcing this little computer glitch to shoppers?  When I asked they said the greeters were supposed to be telling people as they entered the store.  I think they need to go check for a pulse on the greeter at the door I entered.  Apparently she either died or missed the memo about notifying shoppers.  It would be hard to guess which had happened.

Did I mention I hate Wal-mart?

I'm done now.  Really, I am lauging at these things.  Don't think I'm going mental on you (at least not more so than I am already!)
Posted by otherwise known as mom