'She's not in trouble, but......'
These are not the words a mother wants to hear when her child's kindergarten teacher brings the child out to car pool line.  Yet, these were the words I heard last week.
It appears Grace's friendship with a little boy in her class has grown a wee bit too cozy.  He asked her for a kiss and she obliged with a big smooch on the lips underneath the monkeybars during recess.  Two teachers saw them and reported the incident to Grace's teacher.
We're discussing who we kiss and don't kiss.  Let's hope the lesson sticks for a few years.﻿
***************************
And while we're on the subject of teachers reporting on my kids' behavior at school.......
I received letters from John and Emily's homeroom teachers two weeks ago.  Apparently Grace isn't the only one of my kids catching the teacher's eye with their (mis)behavior.
John's note from his homeroom teacher explained that she had nominated him to attend the Junior National Young Leaders Conference.  I don't know a lot about this yet, but it is a chance to spend a week in DC and learn the qualities of good leadership.  We're very proud he was recognized with this chance.  Let's hope it works out where he can go.
Emily's note from her teacher stated that she had been nominated for the "Hilltopper" award for the month of September.  About twenty kids in the school receive these honors each month.
They were invited to attend a breakfast last week before school where they were recognized.  Each student received a t-shirt they may wear on Wednesdays the rest of the year (big stuff for kids who are required to wear uniforms).  In addition, they received a certificate.  Emily was nominated for her excellent leadership in her classroom and for her extra effort on homework.  (I think her teacher really saw and appreciated the struggles Emily overcame starting the school year.)
Here she is receiving her certificate. 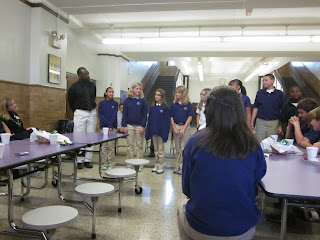 and eating breakfast with the other kids who were recognized. 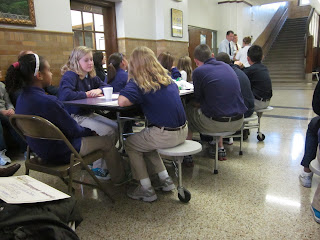 Here we are on our way to the pumpkin patch with Grace's kindergarten class. 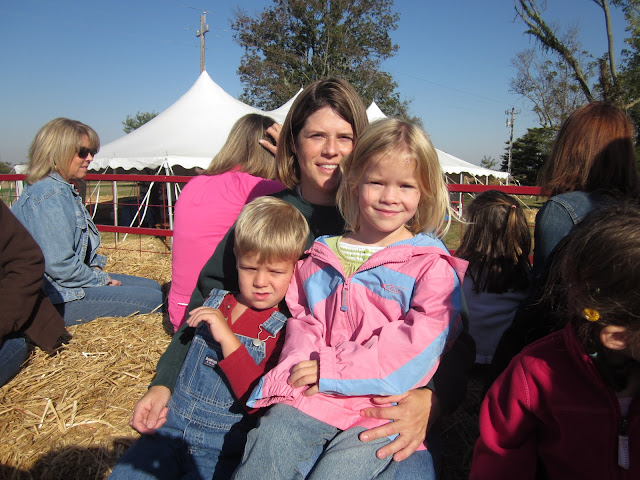 Grant found about five different pumpkins he wanted.  He'd pick one and take it to the wagon, then change his mind and go back for a different one.  I finally had to cut him off.  He wasn't a very happy little fellow at that point.

Here was his first pick.....I gave up trying to photograph the one he finally took! 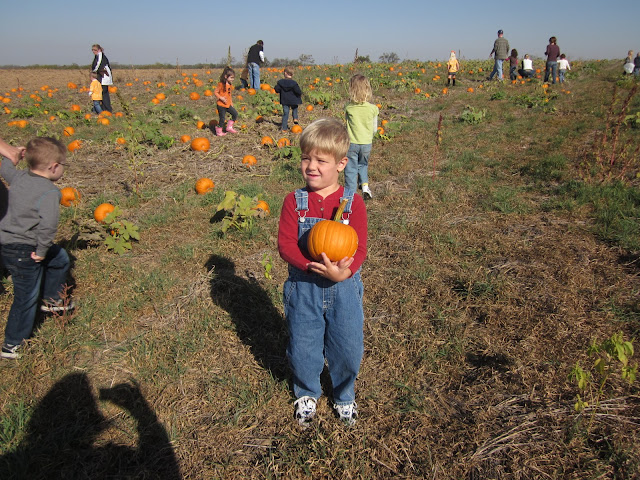 Grace walked straight to this one and never looked at another pumpkin....a girl after my own heart....she knows what she wants and there's no reason to debate the issue any further! 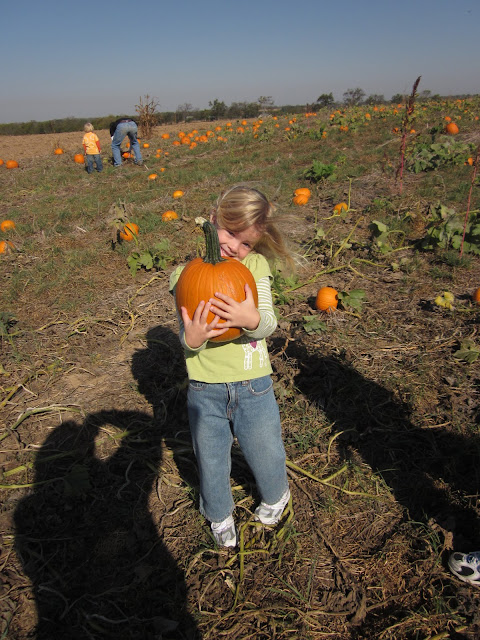 David helped Grant get dressed that morning.  He wasn't overly thrilled with the overalls.  Whenever someone would comment about them, he would say 'but I want them off!' 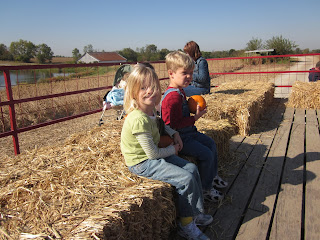 Ready for the ride back to the barn from the fields.... 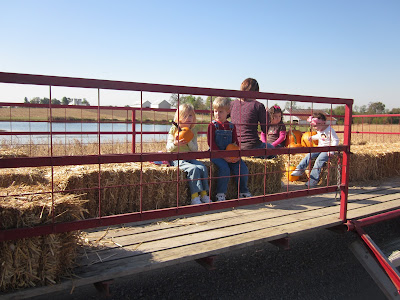 These activities took place the same day.  After the pumpkin patch, I dropped G and G back at home.  David came home from work early to keep them because I then had to go get John and Emily at school.  They had their second Quick Recall match that afternoon.  Their school won for the second time.  Both kids got quite a bit of playing time.  I think John scored four or five points.  Emily knew the answers to several questions....just not the ones asked while she was playing!  Better luck next time, E.
Whew!!  If I got any prouder tonight, I'd bust the buttons off my shirt (except I never have buttons since I am forever a t-shirt kinda girl).
Gotta get to bed now......5:30 comes early.
This early morning stuff is going to kill me I think.
Farmer Grant in his bibs 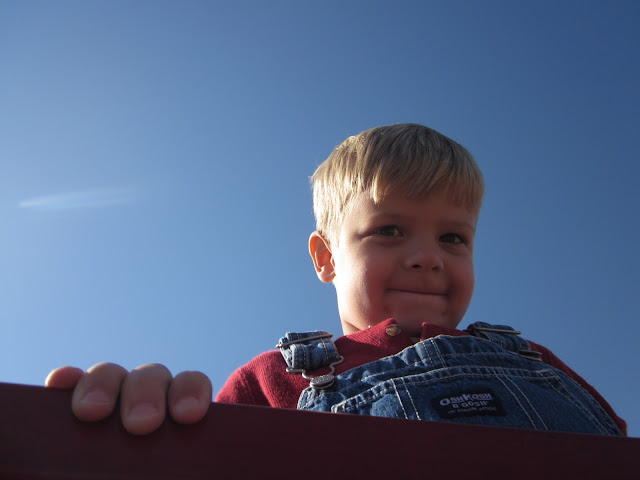