Mom:  No you may not go out wearing that.

Mom:  That doesn't cover you up.  You can't wear that outside.

Child: (really whining)  But I don't like those pants! (pointing to the ones now on the floor)

Mom:  You may put those pants on or not leave this house.  You pick.


You might think my emerging adolescent daughter would be capable of such drama, but not this time. 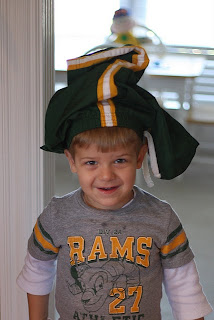 It was my three year old.....practicing his hard headedness (is that a word?)  I know he's getting an early start on the clothing battles, but I guess I deserve it seeing a show my two oldest kids will pretty much whatever I pick for them.  They're really good about not being picky with their wardrobe.

He refuses to wear jeans....says they scratch his legs.....it's getting cold folks.....how bad of a parent am I if I'd rather see him shiver than listen to him whine about scratchy legs???
Posted by otherwise known as mom