I'm sure you heard it too, but I'll repeat it anyway.
The guys on the radio today said there was snow on the ground in  forty-nine of the fifty states.
I wonder how often that happens.
Grace made this cute little guy Tuesday at kindergarten. 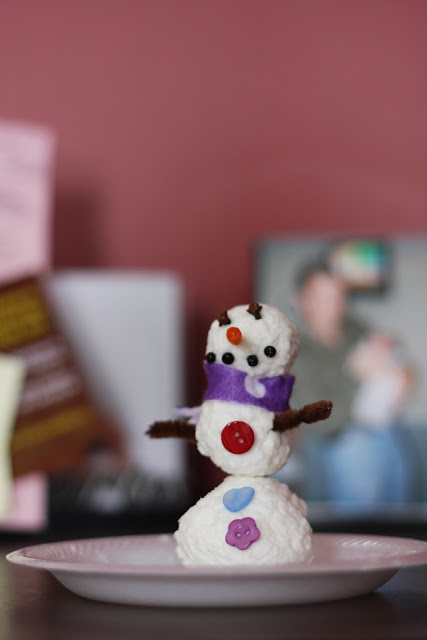 He's made of soap so he smells really terrific along with looking pretty darn cute. 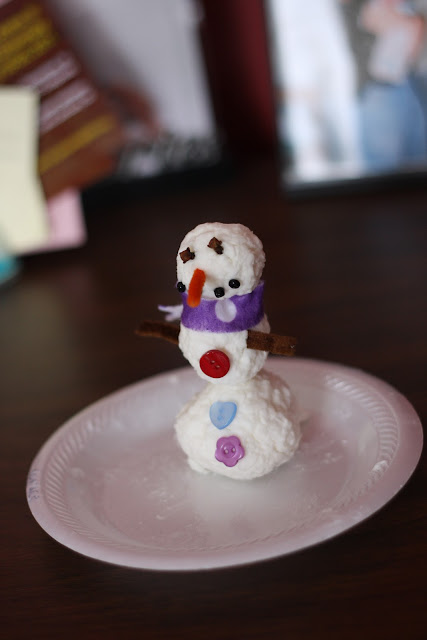 The kids were out of school Wednesday so they got a good chance to play outside in the white stuff.
Grace and Grant stuck pretty close to home.
They made snowballs and sledded down the hill by the house. 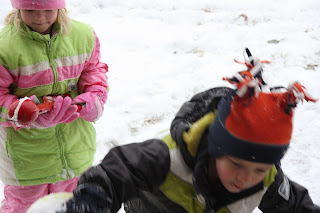 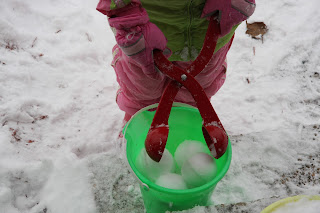 John and Emily shoveled a few driveways for neighbors.  John seemed to fare better than Emily.  One guy paid him twenty dollars.  Emily came up with eight dollars and a plate of homemade cookies from another lady.  She seemed happy with her payment.  She took them to the basement and hid them.
John was out most of the afternoon.  By the time he came  in he was a popsicle.
The timing couldn't have been better for the kids to be home for a day.  All of those freshly baked cupcakes from the weekend are now covered in icing.
Here's some of our handiwork.....
palm trees and sandy beaches to counteract the coldness outside.... 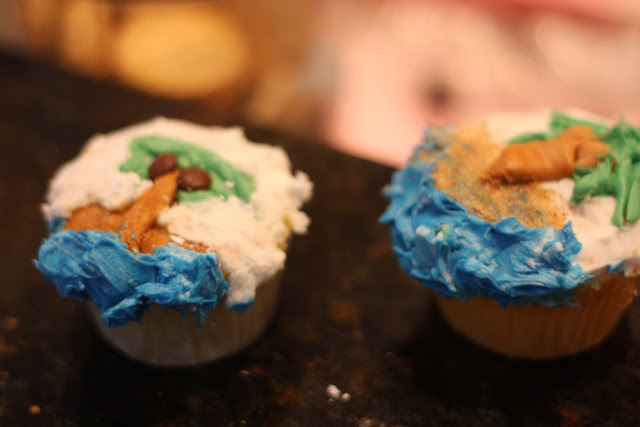 and some ducks......mostly because I had the right things to make ducks! 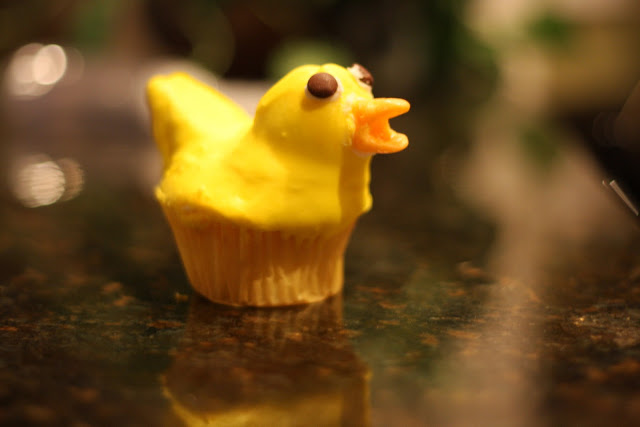 The kids had quick recall tonight.  They lost in the third round of competition so they are out of the tournament.  There is still a governor's cup showcase that they will compete in, but my two kids won't be able to participate.  We will be busy elsewhere that weekend, so they are finished for the year.
Tomorrow I have to take the kids to school then hurry home and get the dogs.  They are going in for a little nip/tuck/cut session tomorrow.  There will be no more puppies in our future after tomorrow's procedures!!
There might be a new addition to the zoo soon though.  The details are still being worked out as I type this.  I'll post more about that matter when the time comes.
NO, we are not getting horses yet.
AND NO, there will be no more little Davids or little Angies.  The baby beds have been retired to the attic until such time as a grandchild presents a need for one......and that better be a LONG TIME from now!!
Speaking of babies,
my baby, who is freshly turned four years old, is now old enough for preschool.  I go tomorrow afternoon to register him for the preschool class that John, Emily and Grace have had the privelege of being in.  He will have  the same teacher they have had in the past.  I told Carol(the teacher of the two day four year old class) that she was not allowed to quit or retire for two more years.  If she did, I was dropping Grant on her doorstep two mornings a week to be 'homeschooled' by her.
She laughed.
I didn't.
I wasn't joking.
I cannot believe he is going to preschool this fall.  It seems like yesterday he was in diapers.....oh wait, with him that's not far from the truth.  The little guy still wears them to bed.  He drinks a proverbial gallon of liquid at night which equates to some pretty soggy mornings still.  I prefer a few wet pull-ups at night instead of a few wet sheets.  I'm not ashamed to admit that.
I'll post more later, but I've got to get to bed tonight
busy day today and busier day tomorrow.
Before I quit, I have to say one more thing....
HAPPY BIRTHDAY, MOM
We love you!!!!!!
Posted by otherwise known as mom