We're still here and doing great.  I know I've not posted anything for a while.  We've been busy not doing much of anything important but busy just the same.
David is out of town right now.  No school today for MLK day.  We've been hanging out at home most of the day.  I cleaned the attic.  I fixed a paper towel holder that kept coming off the wall.  I stripped Grant's bed because he insisted last night that he could wear big boy underwear to bed....then insisted he needed his cup of water to take to bed with him.  "I won't drink it all, mom"......LIAR!!   I cleaned the playroom with Emily and John's help.  We worked on teaching Remington to go out with Meg and do his business behind the fence where Meg goes to do hers.  I've worked on a little 'pet' project that I'm still not ready to share all the details about.  I've done eight loads of laundry and counting. I made and used my first batches of homemade laundry detergent and dishwashing detergent......both with great success so far.  It's way too early to call the project a permanent part of the Shupe routine though.
Doesn't that sound like a jolly good time??  For a little more excitement John and Emily wanted to go to the Family Bookstore today.  I took them and we spent an hour browsing there then headed to the other end of the same mall much to the delight of the younger crowd.  We spent the next couple hours eating pizza and earning tickets at Chuck E. Cheese's.  We don't do that often.  They loved it.
I've got lots of pictures to download and share, but it is getting late tonight and I am working very hard at keeping a New Year's resolution (even though I am not fond of making resolutions in the first place).  I am trying to be a good girl and iron the eight or ten pieces of laundry each week that need it instead of making a pile as tall as one of my kids before dragging out the ironing board.  I know i've counted well over fifty pieces needing ironed piled in the closet at one time before.  Therefore, there shall be no sleep until the ironing is completed tonight....(i hope).
***************************
Now, since you've stuck with me through all my ramblings, I thought I'd reward you with a look at what the kids worked on yesterday.
After church, John had one of his friends come over to spend the day yesterday.  Kaden is a really great kid and I enjoy having him over.  The two guys can find some pretty interesting things to do to entertain themselves sometimes.
Take yesterday for instance......
They started building this contraption...... 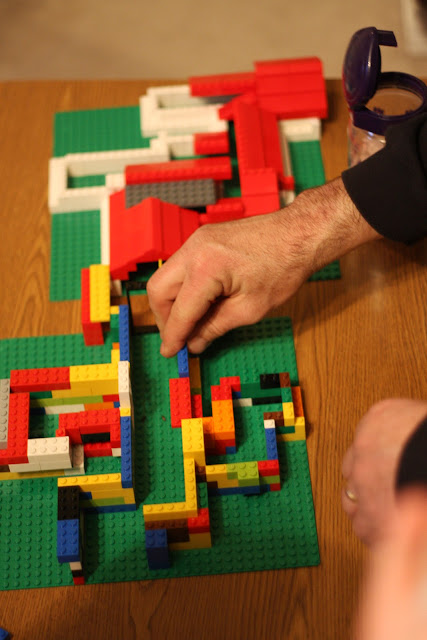 It isn't a house.
They made it for this little guy. 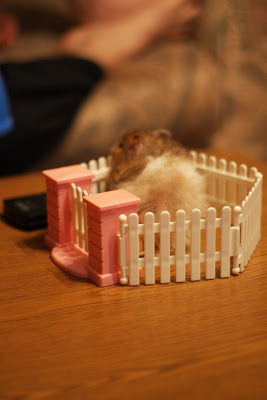 This was the hamster paddock before the start of the great hamster races. 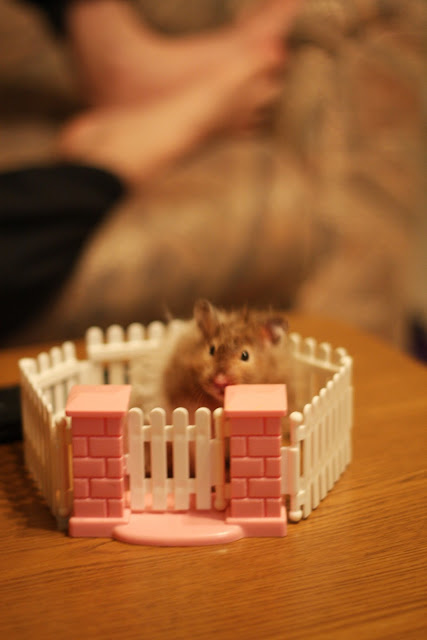 Mr. Hamster got quite a workout last night after Kaden went home.  They ran out of time while he was here, but they were working on a hamster maze.  The six of us were in the basement playing Wii (our new favorite thing to do as a family) last night and enjoyed watching John and Emily race their hamsters through the maze. 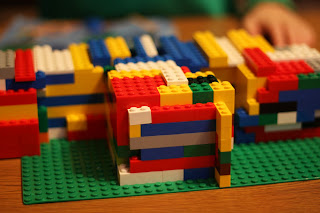 Mr. Hamster seemed to enjoy the change of routine.  He was more than willing to navigate the tunnels the kids had made for him from Legos. 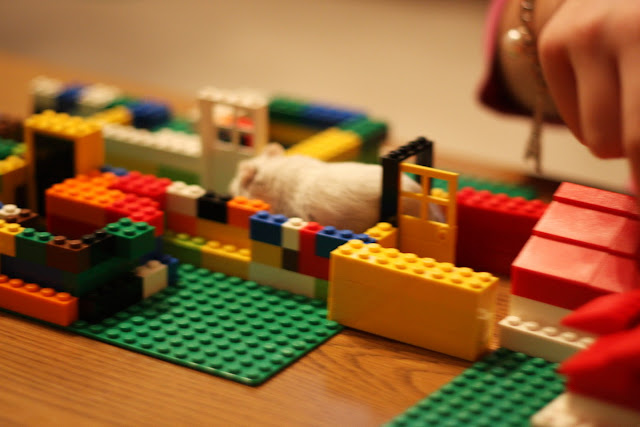 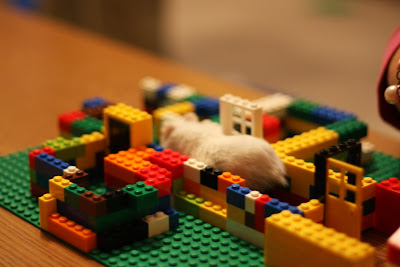 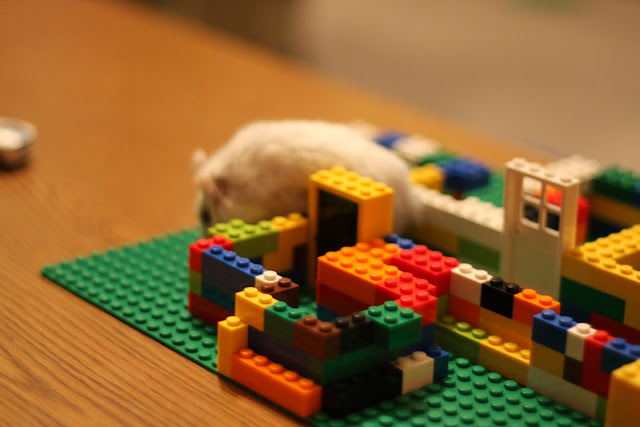 Then when John's hamster wore out, we grabbed Emily's hamster and gave it a workout out too. 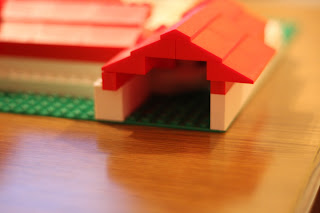 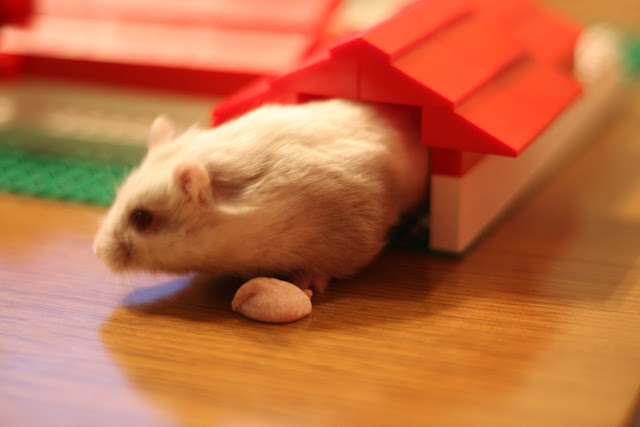 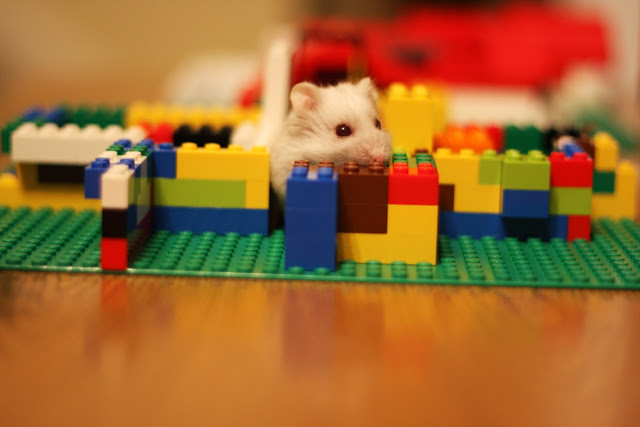 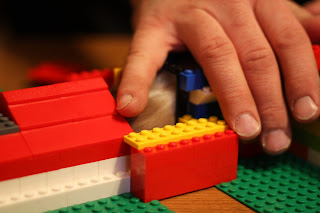 Quite a contraption they built isn't it? 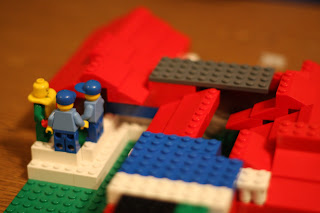 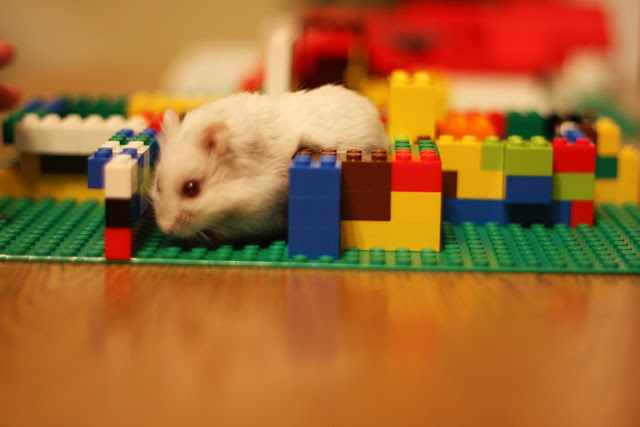 OK.
I know that's probably way too much excitement for one day.
I promise I'll have better posts after this.  I've sort of enjoyed my little blog vacation even though it was not planned to be that.
I hope to get pictures off the camera and get caught back up this week.
Love you all.
Hope you had a good weekend.
*********************
Hope Ellie is feeling better!!!
Poor girl.
Remington and Meg both seem to be recovering fine.
They're back to fighting around with each other like two overgrown idiots.
I have even locked one of them up at times to separate them and keep them from being so rough with each other.
It's worse than having twins again!! 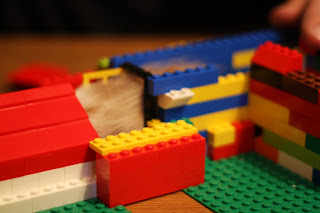