Yesterday was Grace's first day of preschool.  She was so excited!!  When she first came downstairs in the morning she asked (as she has every day for weeks now) if this was the day she started school.  She was so proud to get her backpack and lay it by the door with John and Emily's.  She even insisted on having me fix her a lunch in her lunchbox.  She took a bagel and water in her lunchbox even though they don't eat lunch at school until next week.

We took the traditional first day of school picture on the front steps. 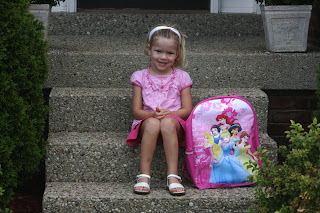 Then off to school we went.  Parents drop kids off in carpool line.  I hoped she would go without any tears and she did not disappoint.  She marched off like she had been doing it for years.  What a brave soul. 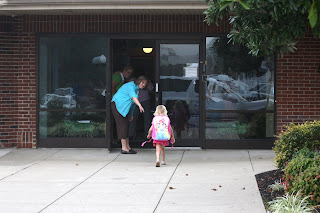 After kicking my feet back and relaxing some quick errands, it was back to pick her up three hours later. 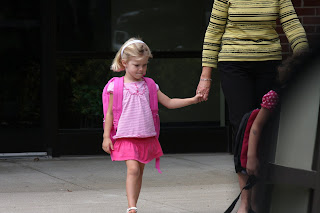 Grace's teacher walked her to the car and told us what happened during circle time with the class.  One boy had proudly proclaimed that he knew the words to the Thomas the Tank Engine song.  Grace then proceeded to up the ante by saying SHE knew the words to "Who Let the Dogs Out" a hip hop song that she learned from big brother and big sister.  Needless to say, Mrs. C is in for a shock when she finds out what this pint sized package has to offer her class this year.
---------------------------------------------------------------
After school, I took Grace to pick out her new frames for glasses.  The child has some "out there" taste in fashion.  She picked a pink and black frame that Grandma would call "cat eye" glasses.  I call them ugly.  It took about fifteen minutes and fifty frames later plus the help of another grandmotherly customer reassuring my fashionista that she looked beautiful in something other than the cat eyes, but we finally settled on purple wire frames.  Hey, purple isn't my thing, but you should have seen her first pick!!!  She is extremely excited to go back next week to get her first set of glasses.
------------------------------------------------------------
John and Emily had open house at Bowen last night as well.  We hurried through homework and dinner that i lovingly prepared from scratch that came straight out of the freezer into the microwave.  Then off to school to meet their new teacher.  Mrs. B is one of their favorite teachers so far.  I think she is good for them.  She doesn't mess around or coddle them.  She expects them to WORK and doesn't give grades to make them feel good about themselves.  They EARN their grades.  I like that.
Enough for now.  More later from our weekend adventures.
Posted by otherwise known as mom