Emily isn't really into the whole primitive eating thing.  We had BBQ ribs for lunch on Sunday.  She loved the meat, but refused to bite it from the bone.  She had to cut every single shred of meat off the bone and eat it with her fork.  This would be her father truing to force feed her one last bone. 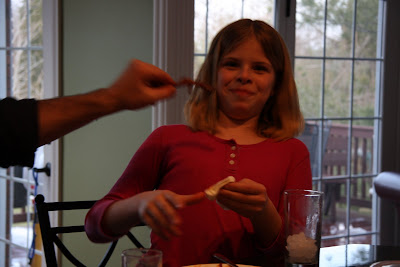 Isn't he such a nice dad?
I could live in one square foot.  I say that because no matter where I am, everyone is right there with me sooner or later.  I'm not even that nice of a person either!!  I don't get it.  I started to roll out sugar cookies Sunday evening and yep, here they all came wanting to help.  Lots of fun, just lots more mess to clean up afterward. 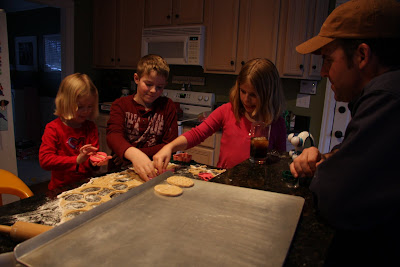 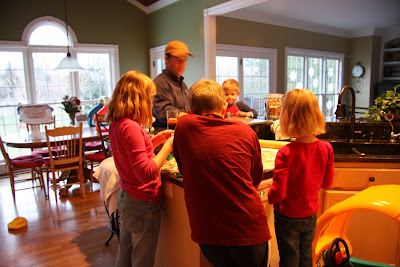 These guys are cutting out the sugar cookies that were going to be Valentine cookies to take to preschool.  What with all the snow, they are now Shamrock/Easter cookies.  Grace hasn't had but one day of school in two weeks.


Grant was downstairs today patting the bunny.  Apparently he took a wrong turn and "accidentally" ended up in big brother's bedroom.  He appeared upstairs again wearing John's football helmet, carrying John's old recorder and holding a squish ball of John's that he LOVES.

Maybe he's inventing a new olympic sport for the 2014 games in Russia.  He couldn't invent anything worse than curling.  I don't get that sport. 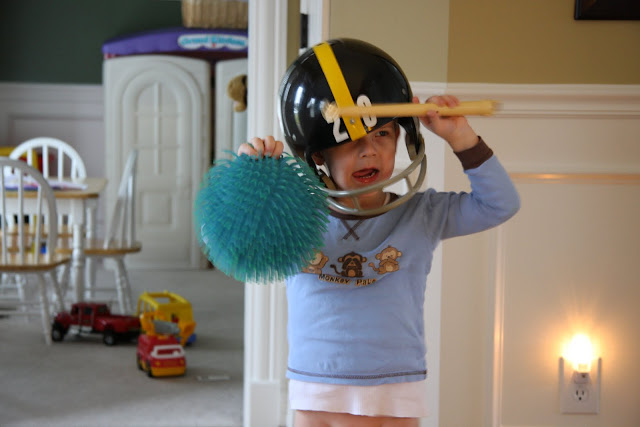 He kept saying...."Let's  play ball, Mom."  So I had to hold the recorder and try to hit the squish ball when he threw it to me.  We ran around the couch (bases) several times before I caught him and tickled him.  Game over.
I had to make him move the ball so I could take this picture.  Parts of his "equipment" were showing. 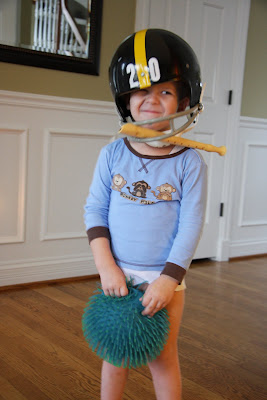