The Brain Game - AKA Quick Recall


Just some news I've had rattling around in my brain but never found time to post......

John and Emily are participating on their school's Quick Recall team.  I would not be a good player on this team.  I cannot even remember the team name from one day to the next.  I've called it Academic Team, Quiz Bowl, and Academic Scholars League.  That's what I've heard it called at other schools in years past.

Isn't there something about dimentia where you can recall things from long ago, but not from last week?  I think I'm going to be their poster child someday.  But I digress.........


This is Emily when she was participating.  I never did sneak a close up shot of John where you can't see the other kids' names.  Sorry John!!! 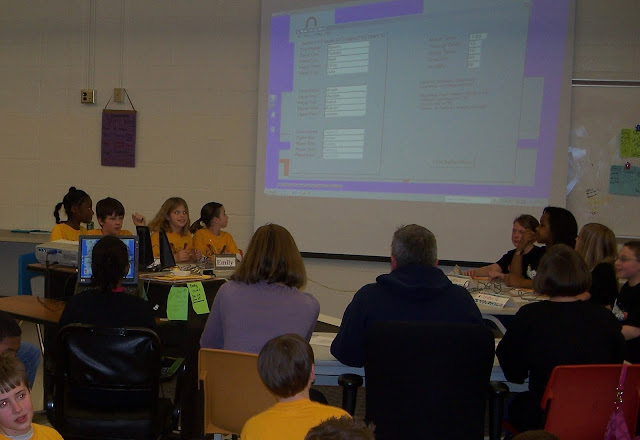 The QUICK RECALL Team (I had to look above to verify I used the correct name) had their first competition on Wednesday after school.  John and Emily both got to participate.  I think they really enjoyed the experience.  The teams played two matches, and our team won both.  The first match was pretty close with our team winning by maybe four points.  The second match finished with a score of 26 to 8.

I am glad we won, but do not much admire our team sponsor's coaching strategy.  She rotated the same eight kids in throughout the match, leaving several kids to play very little.  That would be fine except we were so far ahead that the other team did not have a prayer of catching up.  Lets beat them, not annihilate them.  I hope the next match either provides more equally prepared competitors or that our coach gets a conscience and backs off a little bit.

The following is an excerpt from the school newsletter that came home for February.  I did not know they were running this article until I actually read it in the newsletter.

HOW HONEST ARE STUDENTS AT "B" ELEMENTARY?

Two "B" Elementary students contacted me earlier this month with a proposal for a science fair project.  "B" fifth graders John and Emily Shupe wanted to do a study of the honesty of the people at school.  I do not want to give away all their project details, but the premise did include placing different denominations of paper money in clear plastic bags all around the school.  These bags were numbered and had "Lunch Money" written on them.  The Shupes arrived an hour before school began to place the bags.  They left a list in the office for the staff to complete if any of the money was turned in.  The list was designed to track each bag and determine the age, sex and grade of the person who turned in money.  I am proud to announce that $49 of the $50 dollars was turned back in to the office before 10:00 a.m.  I watched as several of the bags were discovered.  The students never hesitated on their way to the office.  They found the money, it was not their money, so they did the right thing and turned it in.  Conduct like that relfects the good training provided by our "B" families.  Kudos to you!


The principal went on to include a list in the newsletter of all students who turned in  the money.  I think John and Emily's science fair project had a pleasant little ripple effect at school.  It showcased the positive behavior of the majority of the school population instead of focusing on the few who misbehave and usually get the focus of our attention.  Good going, guys!!

Now for the not so good..... I will start by saying I love the school the kids attend.  The administration, parents, staff and students are all great to work with and hard working!  Last week brought a moment's pause though.  No matter how good the school is, it still sits in a large city with large city problems.

I turned on the news last week after dropping the kids at school to news scrolling across the bottom of the screen that our school was in lockdown.  A robbery/murder had taken place in the early morning hours over the weekend right behind the school at a convenience store.  Police and a SWAT team had the suspect holed up in an apartment right behind the school.  They stayed in lockdown for about three hours.  It ended when the suspect took his own life in the apartment.

Not the kind of news you want to see about your kids' school!!!


Tonight.......we are taking the zoo to the circus!  Shriners are in town.  The kids are excited!!  The parents.....well, maybe not quite so much so.
Posted by otherwise known as mom